We have every reason to believe that there are many of HMB and IMCF fighters who have come into medieval full contact combat from reenacting. The variety of armor suitable for this sport is big but not huge.

Full plate armor of Emperor Maximilian I (1459-1519). Armor has a mirror finish and is decorated with copper. Nuremberg, Germany, circa 1475.

It’s definitely rare to see a HMB fighter in Gothic armor. A few of the reasons for this are: the expense, the requirements of the highest skills of blacksmithing, and the fact that it’s not suitable for buhurts and only potentially viable in 1vs1 tournaments.

Small wonder that Gothic armor simply remains, for most of us, an icon and masterpiece of medieval armor craftsmanship.

By approximately 1470 plate armor coupled with a Sallet helmet became an example of elegance and proportions. 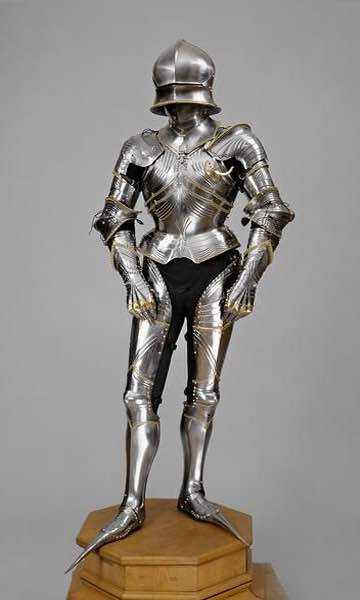 Neither before nor since were the requirements of beauty and nicety of craftsmanship so tested. This period in smithing and craftmanship is inarguably the apex of medieval plate armor’s evolution.

Later armors are also beautiful, but mostly because of their decorations.

Nowadays we call this type of armor “Gothic armor” (German, “Gotischer Plattenpanzer”).  The title is proved the way in which the elements of Gothic armor fall exactly within the sensibilities of the Gothic stylization.

However so far as we know, the main shape of Gothic armor was borrowed from Italian costume, mostly Florentian, which was exceedingly popular among noble aristocrats of Europe in the mid XV century.

We are particularly enamored of a couple of beautiful full plate Gothic armor examples crafted by the hand of one of the best smiths of that time –  Lorenz Helmschmid.