Bascinet was the most commonly used helmet in the middle ages. The shape of skull and visor got some variations during the XIV – beginning of the XV centuries. Word “Klappvisier” means the type of visor connection. It was developed approximately in 1360 – 1370’ss. Transformed from the “nasal” face element it connected to the 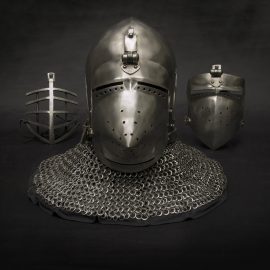 Bascinet is the most popular European medieval helmet. It has various forms of skull and types of visor. We have every reason to believe that helmet is the most important part of any set of armor. Klappvisier was developed as the result of many transformations. Historical sources give us a time period of the beginning

The helmets of bascinet shape with the flat face visor are by far the most popular amongst sportsmen engaged in medieval full contact combat in disciplines such as duel and buhurt, under HMB, IMCF and SCA regulations. The Bascinet helmet was developed from a helmet that looked like a small hat. Medieval knights wore it

Helmet (from German “helm”) is the main part of any armor kit. The most popular type of the helmet is Bascinet. From it’s beginning Bascinet was used as supplement defense. But after it got a visor (German “Visier”, French “visiere”, Italian “visiera”) this type of helmet became a separate protection armor. Bascinet Spoletto type-2 is

Starting from 1330 and until 1410 years Bascinet shaped helmets were the most popular in medieval Europe. It was developed from the skull cap.  Approximately since 1330 year the bottom edge of high bascinet became more extended and elongated to cover the ears and back part of the neck. After 1350 year the skull of

Charles VI (1368-1422), King of France, was called the Beloved and the Mad (french: le Bien-Aimé, le Fol or le Fou). Helmet based on Bascinet of Charles VI from the collection of “Le Trésor de la cathédrale” (Chartres, France). It has a visor so-called a “sparrow’s beak” (french: visière à bec de passereau). Such form

There’s no many historical sources telling us a story about the helmets of the X – XI century. One of them is a wide known Bayeux Tapestry (Tapisserie de Bayeux) dated by XI century. There we can see warriors wearing conical helmets with nasal elements. Most of the helms illustrated in Bayeux Tapestry are so-called

Sallet (old German “schelern”, French “salade”) it’s a type of Western European helmet. At the end of XIV century pointed skull of Bascinet helmets became more round. Side parts and back part became larger. The skull of the helmet got crest approximately in 1420’s years. There were two types of Sallet helmets: Italian style and 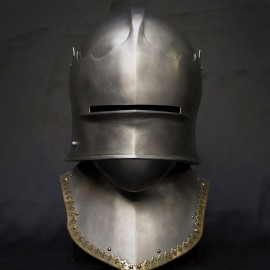 Visored Italian Sallet of the mid of the XV century. Based on the Sallet helmet from the castle of Churburg (Castel Coira), South Tirol. The original helmet is preserved in armor collection of Royal Armouries, Leeds. Dated by c. 1460 and has an object number II.168 A . The main edge of the helm has a plain

Italian Bevor mid 15 century. Based on the Sallet helmet with bevor from the collection of the castle of Churburg (Castel Coira), South Tirol. Made of 1.5mm cold rolled steel. Optionally it can be made of 1.0mm or 1.5mm tempered (hardened steel). Brass decor is not included in base options. Bevor XV century is ideally

Gorget – originally a steel collar used for neck and throat protection. Gorget was a part of ancient armour and was intended to protect against swords and other bladed weapons. The most medieval gorget were simple shields to protect the neck, worn under the breastplate. These plates support the weight of armour worn on them

If you would like to add on your neck a solid protection – steel plate gorget is superb solution. Participating in medieval combat which is reglamented by HMB rules you may know that HMBIA Authenticity Committee requires sportsmen to keep the region and historical frames of their equipment armor.  What to do if your set

The development of medieval helmets dates back to antiquity, all the way back to the age of philosophy and mathematics. However, Forge of Svan specializes in production of practical armor for full-contact medieval combat. Because of that, we won’t focus on the helmets of the early Middle Ages in this article, because according to HMB and IMCF regulations, such medieval helm types are forbidden. Their level of protection is insufficient for modern sword combat and they are potentially dangerous to use. Therefore, let’s get to the helmets of the later period.

Great helm and the top helm are the most famous types of pots medieval helmets that are characteristic for the times of the Templar Order. The uninitiated might think that these helmet types are identical. However, there are some subtle differences. Great helm has a massive wide top and the back is often open and unprotected. The top helm features more elegant shapes and the top of this helmet has a narrowing.

Both types of helmets are often decorated with crosses shaped from brass. Thanks to the angular shape, these types of head armor are well suited for the full-contact medieval combat because the angles hold up the blows well. Their main disadvantage is weight – a helmet like this can reach up to 5-6 kilograms. The newbies, however, often choose these helm types because they are relatively cheap compared to others.

Without a doubt, some of the most beautiful medieval helmets appeared in the Gothic era. This epoch is known for its beautiful cathedrals with their famous sharp spires. These decorative details impacted the armor fashion of the time as well. Just like in the architecture, the ribs and lace patterns appeared in the armor – for example, medieval helmet sallet. The peculiarity of this helm type is the open lower jaw and neck. These parts were covered by the bevor, an element of the armor that was put on as a separate piece, which emphasized the chin. Thanks to such tandem, the knight did not feel discomfort in breathing as well as movement.

The full-contact medieval combat is taking over the world now. Among the fighters involved in this type of sport, helm bascinet is the most popular medieval helm type. They are relatively easy to manufacture, practical to use, reliable, and not demanding.

The appearance of this helmet dates back to the XIV century when the knights together with blacksmiths developed several types of visors for the bascinet. Let’s take a look at each one of them in detail.

Let’s start with the most popular – pig face. You can easily guess from its name what shape does this visor takes – the shape of a pig’s snout. Back in the old days, people often observed nature and paid special attention to details, copying what they liked. This similarity is inherent in virtually everything created by humans. The armor manufacturing process was not an exception. By the way, while watching birds and fish, people also copied the birds’ feathers and the fish scales, which is where plate aventails get their origins.

A visor that looks a lot like a dog’s muzzle is called a houndskull visor. Due to its shape and space between the face and the metal, there’s ample room for breathing. During horseback fights, this type of visor works great against the spear, cutting off the stabs. Full-contact medieval combat fighters also like this type of visor.

Wolf ribs visor provides excellent visibility to the fighter, doesn’t obstruct breathing, and gives a sense of freedom. However, this type of visor is strictly regulated by the HMB federation, so be careful when choosing this type of protection. We, at the Forge of Svan, are familiar with these rules, therefore you can rest assured that the wolf ribs visor you purchase on our website complies with the HMB regulations.

We have been manufacturing medieval helmets since 2004. We have great experience with it and established ourselves around the world as reliable manufacturers. Want to experience the highest quality service? Order your medieval armor from us today and see for yourself.