Brigandine cuisses additionally reinforced with steel plates. Articulated knees are joint with cuisses by rivets, it’s one piece – no holes, no leather laces. Brigandine cuissards have leather points on the top and are equipped with leather straps and steel buckles. Thigh is well protected from all sides. Brigandine armor is very adjustable because of

Main part of the XIV century was a time of numbers of experiments in plate armor developing. Though different materials were in use till the end of the XIV century, starting approximately from 1350 year steel and iron began to displace all of them. In Italy and especially in Germany blacksmiths created plenty of various

This model of leg armor is based on medieval plate legs typical for the late XIV – early XV century. During the armor evolution the leg protection was changed from its early forms to the functional articulated plate armor. And it’s the most essential points are: hip plate is made from one metal sheet; it’s

When you’re deciding on your battle equipment, the choice of the articulated plate armor is of the utmost importance. After all, the thigh piece of armor takes the most severe blows. You raise your shield over your head and there’s nothing left for your opponent to hit than your high leg armor. Therefore, you’d want 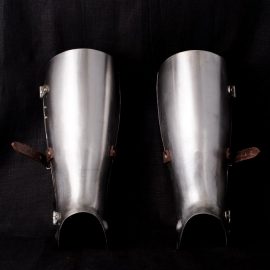 Stylisation of leg armor of French king Charles VI (1368-1422), based on a example which is preserved in Chartres Cathedral, France.  Legharness is adapted for the full contact medieval fight. Articulated upper-extension plate of the cuisse is movable and covers top of thigh. This legharness is reinforced with a central rib. Made of 1.5 mm

Sabatons (german Eisenschuhe, french sollerets, italian scarpe) were formed by the end of XIII century. Before this part of armor was invented, feet of the medieval knight were covered with chainmail stockings. In some while the front part of the foot got covered by the steel plate. It was fixed with the leather strap. Approximately

Only knights and cavalry could afford the full leg armor back in the Middle Ages. The infantry and other soldiers could only count on leather and brigandine legs armour. Of course, after big battles, the soldiers engaged in looting and removing their killed enemies’ trophies. These, however, were isolated cases because the lion’s share of the trophies usually was taken by the warlords.

This lack of leg armour was the reason for the fact that most injuries sustained during combat were limb injuries. Add to that mix the horrible medicine that was prevalent in the Middle Ages, and you get a huge percentage of deaths because of limb injuries.

During the peace periods, the rulers did everything to keep the military training of the knights at a proper level. One of the ways to do that was to set up tournaments. There was a little problem, however – knights often died in the tournaments, which was obviously not the way rulers would want it. Therefore, the rule to use only non-sharpened weapons was enforced. The spectators naturally wanted more blood, but at the same time, they realized this kind of entertaining could also be interesting and adopted new rules.

There were many varieties of tournaments. There were those in which the knights didn’t need full leg armor. This kind of tournament was called “through the pole.” During such a battle, the enemies were located on either side of the pole. The pole itself was set parallel to the ground at approximately belt level. As a result, knights could only hit above the belt, since leg kicks were not possible. There were also other kinds of tournaments that required good leg armour for protective functions. Several hundred years have passed, and full-contact battles are of increasing interest and are gaining more and more viewers.

Everyone who is engaged in or thinking about HMB and IMCF full-contact fights should approach the choice of the equipment as seriously and responsibly as possible. Beginners want to cover their hands and arms first, expecting the opponent to hit the upper limbs more. However, our battle experience shows that the fighters actually get more injuries they could’ve avoided if only they had armor legs. In addition, high-quality articulated plate armor will allow you to feel confident in both buhurt and dueling fights, the times when it’s important to stand firmly on your feet or make a leap towards the enemy.

Majority of the leg strikes fall on the high leg armor and much fewer on lower leg armor, which is why we recommend using stronger materials on the upper leg. However, when it comes to the greaves leg armour , you are covering the potentially open areas and can concentrate on your fighting technique and your opponent. Also, something to keep in mind, whether intentionally or accidentally, chances are you will still probably going to be hit on the open parts despite the fact that it is forbidden.

We also can’t ignore the sabatons armor. “Who will reach for that with a weapon?” you may ask. However, if you watch a buhurt, you’ll notice that if one falls down during the battle, the fight goes on, no one pays attention to you, and especially to where your feet are. However, they are open and any accidental impact is a threat. The fighters are focused on their enemies, not you, therefore even a member of your own team, in such a situation, is as dangerous to you as an enemy, if you don’t have sabatons armor.

I hope I have convinced you that full leg armor is an integral part of your battle equipment, and that lower leg armor is as important as upper leg armor. In addition, don’t forget to take care of your feet and put on sabatons armor. Of course, there is also the greaves leg armour option that would protect your shins.

Forge of Svan has been manufacturing medieval plate legs since 2004. We have extensive experience with splinted leg armor as well as leather leg armor. Therefore, don’t delay – get your battle protection. Your opponents have already ordered their armor from us a long time ago, that’s why they are so confident. Get yours today!