The main element of any set of armor is a helmet. In any role-playing game or reenactment, you need a reliable helmet to protect the most valuable part of your body. Helmets are designed to be as durable as possible and to stand up to any weapon or blow without losing their shape. Our Great 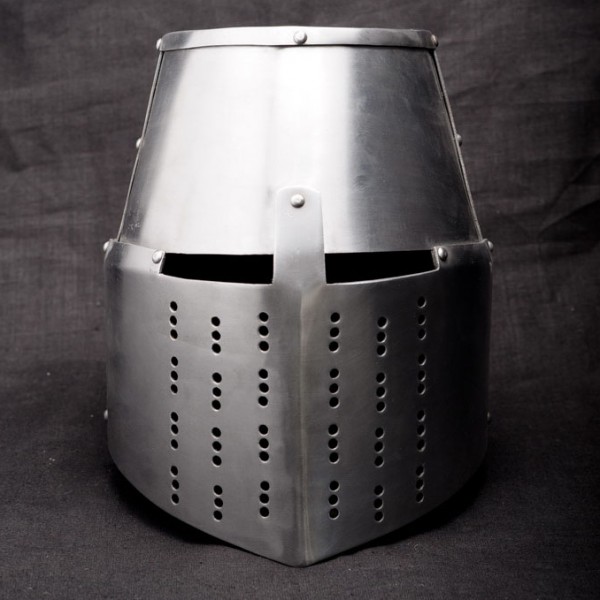 Cylindrical shaped helmets appeared starting in approximately 1180. Often dubbed great helms or tophelms, they were in use from the middle of the XII until the XIV century. Tophelms were made to fit closely to the head of knight and some of them even had proto visor that could be opened like a small door, 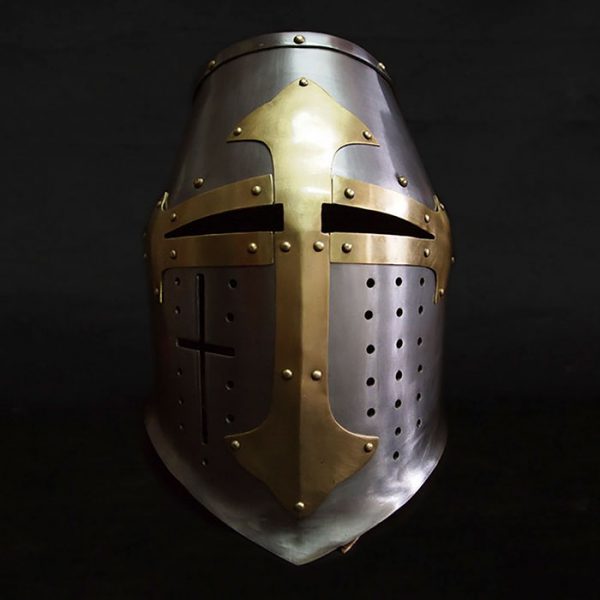 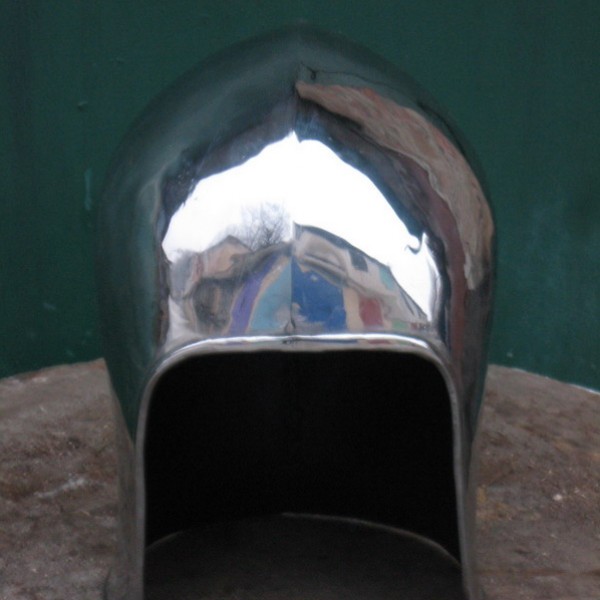 The barbute was a common Italian infantry helmet of the XV century. A barbute was always visorless, but its “face” came in three basic forms: open, T-shaped, or Y-shaped. Its major innovation was its extension of the “cheeks” towards the middle of the face, which provided more protection while maintaining excellent visibility and breathing capability. 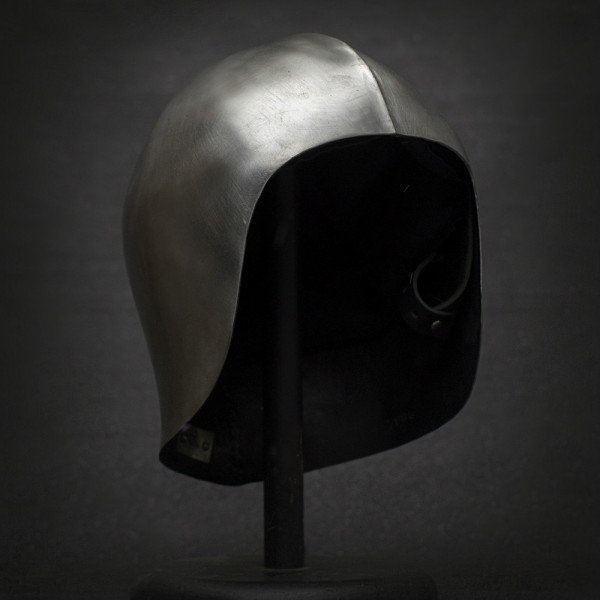 Our Open Sallet is based on a late XV century skull cap type sallet helmet. The sallet (“celata” in Italian) was very popular in Italy. The term “celata” appears in 1407 in the armor manuscript of the Gonzaga family.  The description of this helmet in the historical records indicates various differences from the barbute (another popular 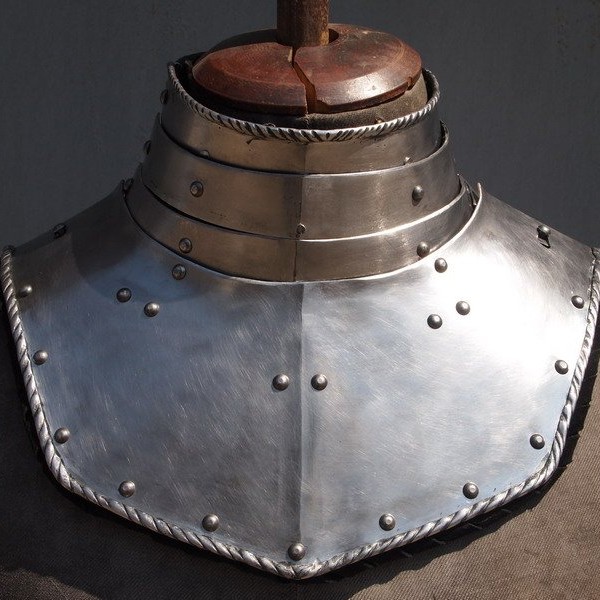 The development of medieval helmets dates back to antiquity, all the way back to the age of philosophy and mathematics. However, Forge of Svan specializes in production of practical armor for full-contact medieval combat. Because of that, we won’t focus on the helmets of the early Middle Ages here. According to HMB and IMCF regulations, these types of medieval helm are forbidden. Their level of protection is insufficient for modern sword combat and they are potentially dangerous to use. Accordingly, we will focus on helmets from later periods here.

The great helm and the tophelm are the most famous types of medieval pot helmets and are characteristic of the time of the Templar Order. The uninitiated might think that these helmet types are identical. However, there are some subtle differences. A great helm has a massive, wide top and the back is often open and unprotected. The tophelm features more elegant shapes and the top of this helmet is tapered when compared with the great helm.
Both types of helmets were often decorated with crosses shaped from brass. Thanks to the angular shape, these types of head armor are well suited for full-contact medieval combat because the angles deflect blows quite well. Their main disadvantage is weight – a helmet like this can weigh up to 5 or 6 kilograms. Newbies often choose these helm types because they are relatively cheap compared to others.

Full-contact medieval combat is taking over the world. Among the fighters involved in this of sport, bascinets are the most popular medieval helm type. They are relatively easy to manufacture, practical to use, reliable, and not terribly weighty.
The appearance of this helmet dates back to the XIV century when the knights, together with blacksmiths, developed several types of visors for the bascinet. Let’s take a look at each one of them in detail.

Let’s start with the most popular – pigface. You can easily guess from its name what shape this visor takes – the shape of a pig’s snout. Back in the old days, people often observed nature and paid special attention to details, copying what they liked. This co-opting of nature is inherent in virtually everything created by humans and the armor manufacturing process was no exception. Many bascients, pigface included, were equipped with plate aventails which drew their inspiration from the feathers and scales of birds and fish, respectively.

A visor that looks a lot like a dog’s muzzle is called a houndskull (or “hounskull) visor. Due to its shape and the space between one’s face and the metal, there’s ample room for breathing. During horseback fights, this type of visor works great against spears, easily deflecting thrusts and stabs. Full-contact medieval combat fighters also like this type of visor due to the ease with which it turns blows..

Wolf ribs visor provides excellent visibility to fighters, doesn’t obstruct breathing, and gives a sense of freedom. However, this type of visor is strictly regulated by the HMB federation, so be careful when choosing this type of protection. At the Forge of Svan we’re familiar with these rules and you can rest assured that the wolf ribs visor you purchase on our website complies with HMB regulations.
There are two types of mounting for medieval helmet visors:
1. Klappviser (or klappvisor) mounting is located on the front of the helmet.
2. Splitvisor mounting is located on the sides of the helmet and is a bit heavier than the klappviser, but also more reliable.

This type of bascinet saw common usage in the XIV century, but began to die out during the first half of the XV. Nasal helmets evolved from open-faced bascinets which left too much of the face exposed. Blacksmiths’ solution at the time was to add a triangular element that extended from the brow of the helmet down to either just below the nose or to the chin where its wide base would protect the lower jaw. Commonly called a “bretèche”, this addition to the bascinet, along with the mail aventail, greatly increased the protective qualities of the helm without sacrificing visibility or breathability.

Without a doubt, some of the most beautiful medieval helmets appeared in the Gothic era. This epoch is known for its beautiful cathedrals with their famous sharp spires. These decorative details impacted the armor fashion of the time as well. Just like in architecture, the ribs and lace patterns appeared on armor – for example, the medieval sallet helmet. The peculiarity of this helm type is the open lower jaw and neck. These parts were covered by a bevor – an element of armor that was put on as a separate piece and protected the upper chest, neck, and chin. Thanks to these tandem pieces, knights did not feel discomfort while breathing and had greater cranial mobility.

At the Forge of Svan, we have been manufacturing medieval helmets since 2004. We have extensive experience and have established ourselves around the world as reliable manufacturers. If you want to experience the highest quality service, purchase armor tailor made for you, and rest assured that your safety is top priority, order your helmet of choice from us today and see for yourself.