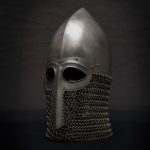 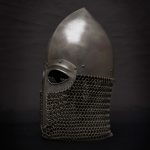 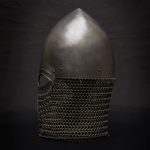 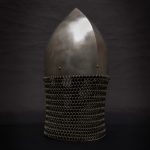 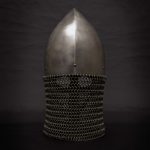 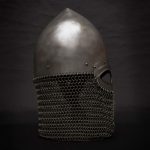 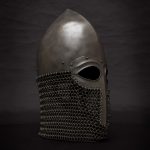 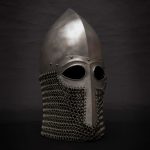 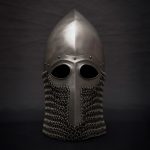 There’s no many historical sources telling us a story about the helmets of the X – XI century. One of them is a wide known Bayeux Tapestry (Tapisserie de Bayeux) dated by XI century. There we can see warriors wearing conical helmets with nasal elements. Most of the helms illustrated in Bayeux Tapestry are so-called “Spangen-helm”. This German word was used because helmets consisted of segments. Such construction of head protection had been used up to the XIV century. Of course it has been evolving and developing during the centuries.

Such type helmets dated by the Late Antiquity and The Migration Period were found during excavations. Most of them have a shape similar to ones represented on Bayeux Tapestry. Some helmets had additional cheeks protection. They were made from bronze or iron. The base construction included the main head hoop and vertical plates connected on the top. The nasal plate was riveted on the bottom of the head hoop. Following the illustrated manuscripts, engravings and stamps many historians assume that such conical shaped helmets remained without changes until the XIII century. However the cheeks protection plates were often out of use.

The artifact of the conical helmet was found in the north of France and now is preserved in the Metropolitan Museum of Art in New York. This helmet consists of vertical segments but doesn’t have a head hoop. On the Bayeux Tapestry we can also notice helmets made from one piece of metal. And there are historical sources to prove that blacksmiths of that period were able to craft a helmet from one piece of forged steel sheet.

Our Norman helm consists of conical dome and riveted mask with “eyes” and nasal protection. There’s a decorative rib line on it to imitate the eyebrows. The nasal element is also decorated by rib line going right on the center. Helmet can be equipped with aventail: chainmail or riveted one by your choice. We draw your attention that such helmets go only with this type of aventails, using of scale aventail is not possible because of the big interval of time age between them. You can choose a Norman helmet made from mild steel, tempered steel, stainless steel or titanium.

As an appropriate body protection our Birka Lamellar Armor makes a good addition to Norman helm.