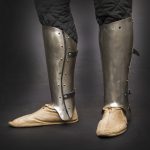 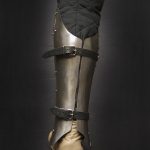 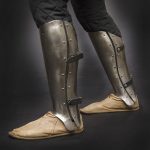 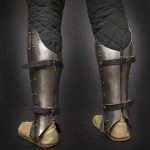 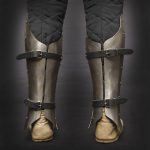 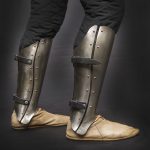 Segmented plate greaves armor was commonly used in XIV century. In some old English manuscripts they also named as “schynbalds”. But French word “greaves” or “demigreaves” displaced it as well.
Shin protection was fixed to the quilted padded stockings. As mentioned before this type of armor was used in XIV century on a large scale. Sometimes greaves was even mentioned in manuscripts of XV century.
This model of shin protection consists of three plates. They are anatomically formed. The lower line goes the ankle shape.
Thanks to smart construction there’s no gap between steel plates. Shin is completely covered and protected from the impacts. It’s a good budget choice comparing to the classic closed greaves. Our 3-plates greaves type-2 are equipped with two leather straps and steel buckles. There are two drilled holes on the top of the front plate for greaves to be fixed properly. This armor can be made from mild steel, tempered steel or titanium.
3-plates greaves are suitable to be used for HMB/IMCF/WMFC buhurt full contact medieval combat.

Please notice, that measurements should be with padding/gambeson.