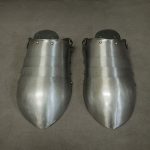 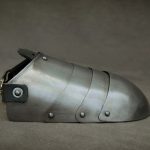 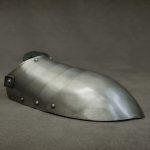 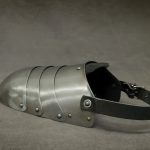 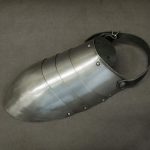 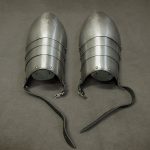 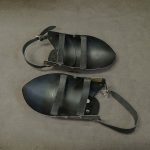 Sabatons (german Eisenschuhe, french sollerets, italian scarpe) were formed by the end of XIII century. Before this part of armor was invented, feet of the medieval knight were covered with chainmail stockings. In some while the front part of the foot got covered by the steel plate. It was fixed with the leather strap.
Approximately in 1290’s this steel plate was made to be articulated. In 1390’s poor soldiers still used leather shoes that was embroidered with very small steel plates.
From XIV century toe-cap of sabatons was pointed, some examples were styled with a long “beak” (german Schnabel, french a la poulaines, italian scarpe a punta). In the first half of XVI century the toe-cap became broad, also known as “bear-paw” (german Barenfusse, french pieds d’ours).

Our Basic sabatons consist of four articulated segments. The toe-caps are pointed so this model of sabatons can suit XIV as well as XV century armor. There’s a leather point with holes on the top of steel plate above talus (ankle bone). Sabatons are equipped with leather straps with steel buckles.
From the deep experience of the best HMB and IMCF buhurt sportsmen is well known, that you shouldn’t neglect this small but essential part of your armor kit. There is abundant evidence that damaged foot or even toe doesn’t allow you to continue the fight.
Our Basic Sabatons can be made from mild steel, tempered steel or titanium.

Please notice, that measurements should be with medieval boots.