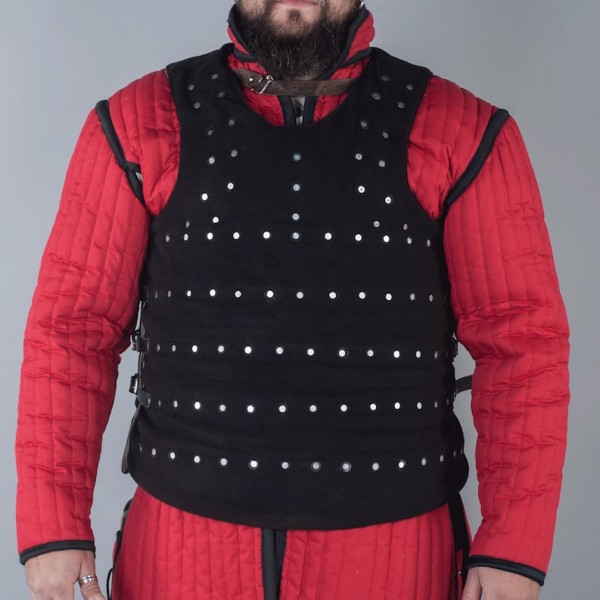 The Kusnacht Brigandine style is one of the most popular brigandines in full contact medieval combat as well as for reenactment. Our model is based on the historical original from Kusnacht Castle in Switzerland (Armor No. 1, after Thordeman 1939), which was burnt in 1352 (Gessler 1923). cThe two main reasons for the popularity of 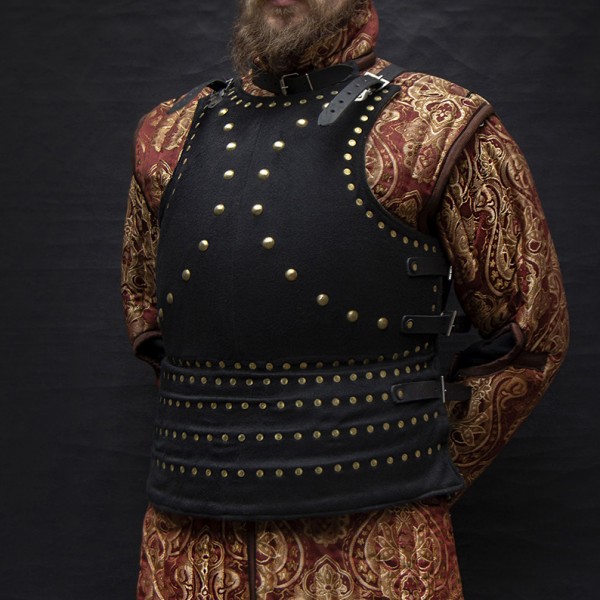 The original Hohenaschau Brigandine was probably made in Milan somewhere between 1380 and 1400. It was found in Castle Hohenaschau in Bavaria, Germany. It currently resides in the Bayerisches Nationalmuseum (Bavarian National Museum) in Munich, Germany. Here at the Forge of Svan, we agree that brigandines are works of art. Their historical value and pleasing 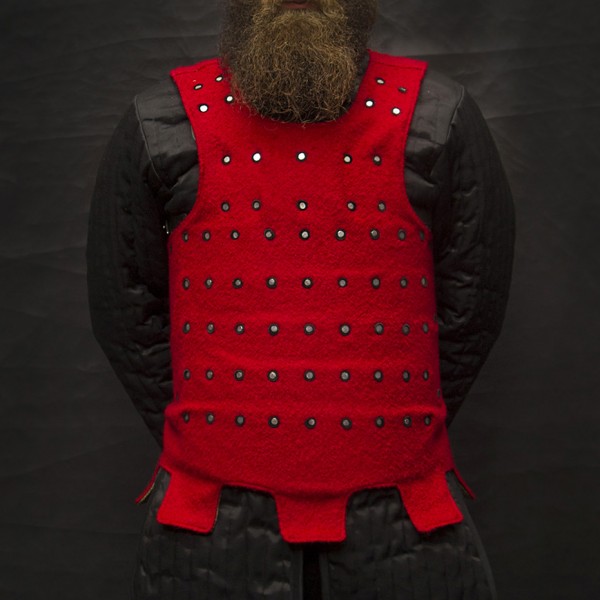 The classic Brigandine – hardened plated armor overlayed by a textile outer shell. A symbol of chivalry, the Brigandine was a fashion statement in addition to a warrior’s garb. It was often covered with velvet with matching arms, and was constructed with functional, yet decorative rivets. During the XIII-XIV centuries the brigandine was a typical 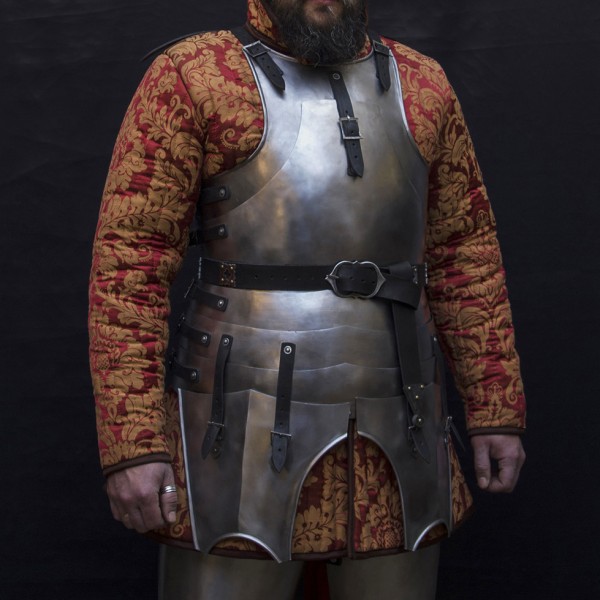 The armorers and blacksmiths of the XV century were constantly searching for a more natural way to lay steel plates of armor over one another. The question was how to combine high safety properties, articulation, and of course, a stylish look. The answer “came” from crustaceans. The steel plates of  the cuirass overlap each other 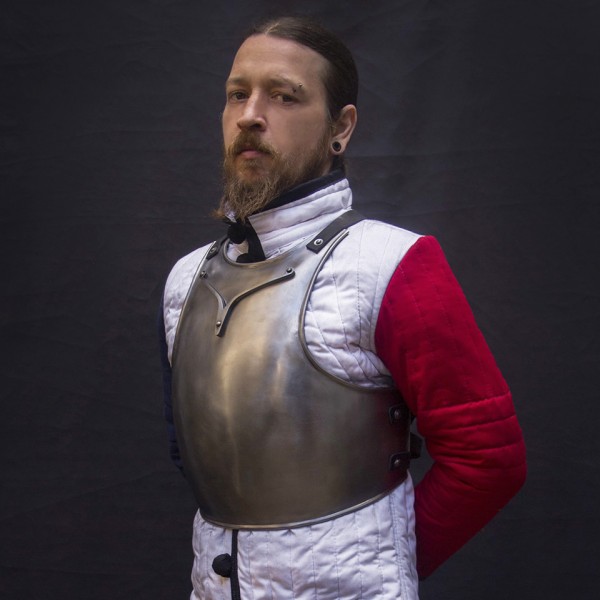 A breastplate is the part of plate armor which covers the front of the torso. As separate armor it appeared at the beginning of the XIV century. The earliest records of breastplate usage are mentioned in description of the armor of Edward III, king of England. This manuscript was made by Gerard deTournai between 1337 and 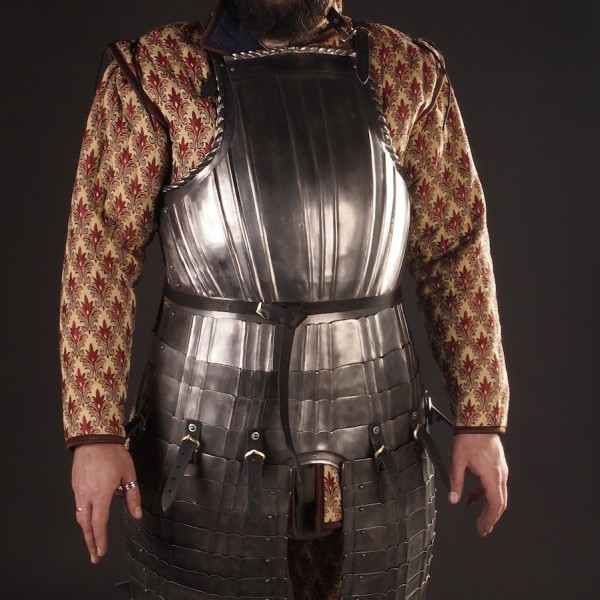 Our Landsknecht Cuirass is a stylization of the late XV – early XVI century cuirass made by well-known armorer Kolman Helmschmid (1471–1532). This type of Renaissance armor would often be combined with a full arm harness and gorget and was called a “three quarter armor”. The Landsknecht Cuirass is made in the Maximilian Style. It 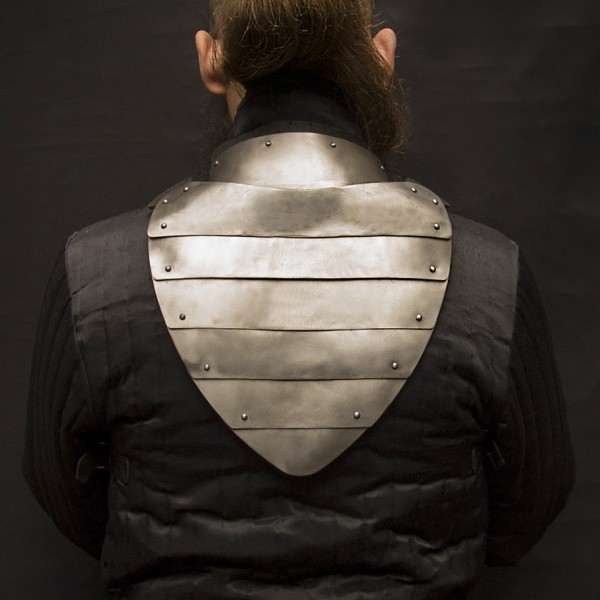 Our Plate Spine Protection augments your already extant spine protection and was developed specifically for those who engage in full contact medieval combat sports. The steel rondel usually found on the back of the aventail isn’t always enough which is why you’ll need our plate spine protection for buhurt. It consists of a curved neck 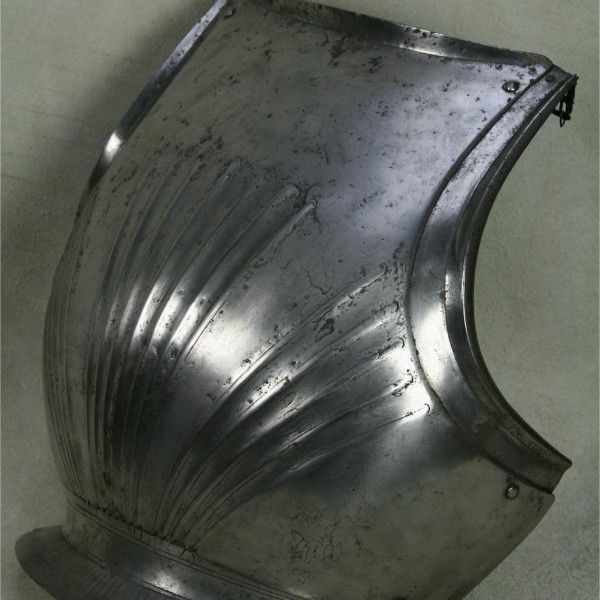 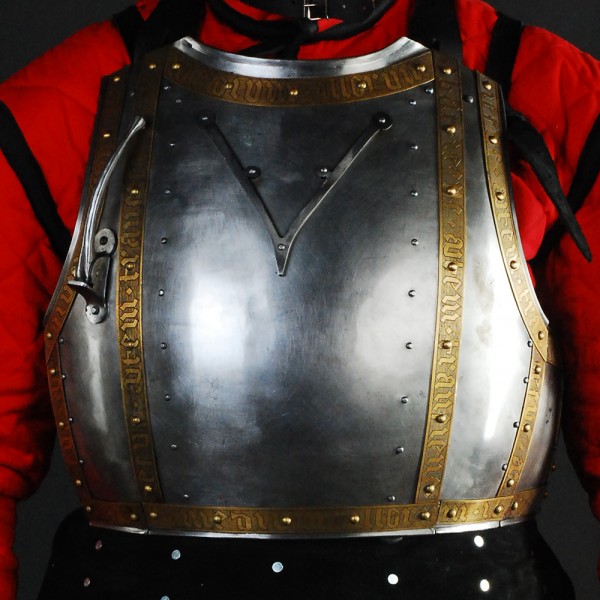 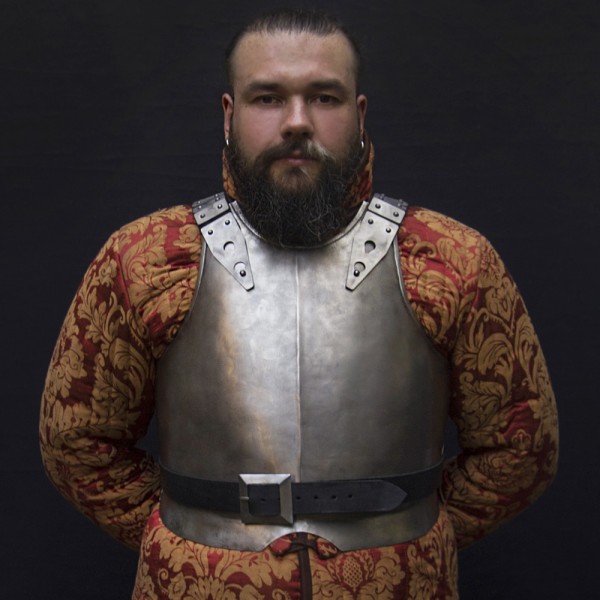 In the second part of the XVI century the effectiveness of gunpowder increased. Consequently, the armories that produced firearms began to prevail over those that produced armor. There was a need to strengthen armor, especially that of the chest, against bullets. This led heavier and heavier armor.  These modifications prompted the knights to refuse less 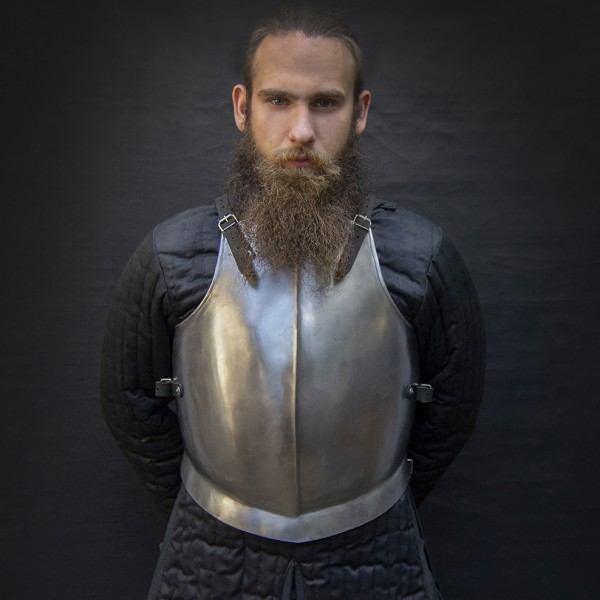 The Cuirass – a common name for armor consisting of one or more whole interconnected metal plates to protect the torso. This is our version of a typical cuirass from Western Europe in the XVI century. It’s forged from 1.5mm cold rolled steel. The base model includes: a matte polish, steel rivets, and steel factory-produced 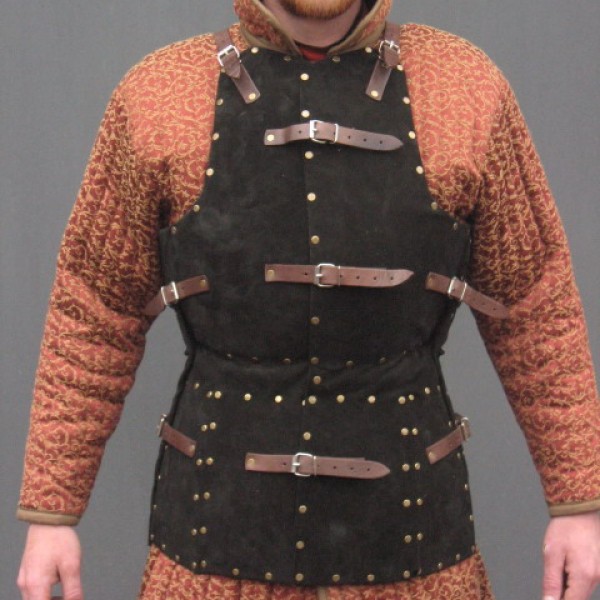 As soon the first person picked up a weapon, another person decided to protect his body from that weapon using armor. The history of custom-made body armor dates back centuries. Initially, people used fabric that was woven with threads and stuffed with felt or batting as well as just roughly dressed leather. This type of armor was dubbed “quilted armor”.

Naturally, one cannot expect quilted armor to protect one very well because weapon strikes are still quite damaging. Therefore, the warriors began to add steel rings on top of their quilted armor. These rings ranged from 3 to 8, and sometimes up to 15 centimeters in diameter. Then, blacksmiths learned to planish metal bars into small plates. The size of these metal plates was typically from 3 x 3 cm up to 15 x 15 cm. This advancement in the art of blacksmithing initiated the era of custom-made brigandine armor, leather armor with metal plates, and lamellar armor.

Though serving the same purpose, each type had its own basis for construction. Leather armor with plates was just that – leather protective gear with small steel plates sown on. In brigandine armor, the metal plates are fastened to the base (leather or fabric) with rivets. Lamellar armor is assembled from small plates held together with leather laces.

On our website you can find a wide selection of brigandine armour as well as lamellar armour. Both HMB and IMCF allow using both types of body armour, so we will be happy to create a tailor-made costume for you with lamellar armour or brigandine piece for you.

As the blacksmith’s craft developed, the masters started making armor covered large sections of the body with solid metal plates. This is how white armor came to be. Why white? This type of armor was called white because the metal wasn’t covered with leather or fabric, but was polished, giving it a light white color. As a result, custom-made cuirasses of various types appeared.

The infantry and poor knights could only afford a steel breastplate. This type of body armour differs in that the back remains open, expecting that the wearer doesn’t turn his back to the enemy during the battle. The lack of back protection helps to cut some costs on costume-made body armour as well as reduce the overall weight of the body armour.

Naturally, open areas of the body are potentially vulnerable to the enemy, but practically all of the knight’s body was covered by metal plates that overlapped one another in one way or another. This virtually eliminated injuries and guaranteed the owner’s safety on the battlefield.
There is a story about a king who was attacked by the enemy’s army and thrown off his horse. Because he was completely covered with metal plates that remained intact, his warriors were able to get to him and fight off the enemies. The king ended up uninjured despite the numerous blows with different kinds of weapons.

Examining pieces in museums, we can note that the thickness of the majority of armor ranges from 0.8 to 1.5mm. Samples up to 4mm thick are encountered too, but those are rare, isolated cases and generally, were relegated to tournament armor. In modern historical fencing and other combat sports derived from medieval practices, we must choose the right balance between convenience and protection, between thickness and comfort.

Before you purchase your body armor, you need to decide its purpose – is it primarily for dueling or buhurt? For dueling, you can use less thick materials. However, for buhurt, you need an increased thickness or you need to use titanium or hardened steel. You can read about how best to select the thickness and material of your armor here. With proper physical training, you can even use heavy armor during duels.

The most famous army that actively used body armor was that of the Roman Empire. Of course, these soldiers wore armor that was relevant for that time and matched the military tasks of that period. Rome’s foes possessed neither weapons nor armor that could withstand Roman equipment, which was the reason Rome was able to conquer half of the (at the time) known world. It was due to defensive armor that Romans had the advantage on the battlefield.
Therefore, when you’re choosing any chest plate armor (also known a breastplate), you’re not choosing just another brigandine or custom made cuirass. You’re choosing a winner’s path. Like the ancient Romans, you’re making a choice to win the duel or buhurt.

Forge of Svan has extensive experience in manufacturing a variety of chest armor and we have won the trust of HMB and IMCF fighters from all over the world. We also have a 100% guarantee on our equipment.

So, don’t delay, order your chest armor from us see why we are the number one forge worldwide when it comes to making chest armor for full-contact battles.