Steel arms completed with the elbow cops with rondels. Made of cold rolled steel with thickness 1.5 mm. May be crafted of 1.0mm and 1.5mm tempered (hardened) steel. This armor has good movement properties which provides you excellent mobility. Steel arms with rondel wings are equipped with leather straps with steel buckles. Armor is painted

This complect of full hand protection is made of 1,5 mm thick cold rolled steel. It provides protection of hand from wrist to shoulder. With the help of leather belts and steel buckles it is very comfortable to wear with other parts of armour. It can protect you from impacts of different kinds of weapons,

Many parts of the Italian style arm harness of the end of XIV c. – beginning of the XV century was found in Chalkis bury in Greece. The similar design elements of plate arms are represented in Chartres, France. Another pair is preserved in the well known Churburg castle in the South Tyrol region. All

Late XV century full plate arm protection. It consists of: pauldrons, rerebraces, elbow cops and vambraces. In the first quarter of XV century Milanese armorers invented very simple way to connect all parts of arm protection by the help of leather straps or sliding rivets. This invention made arm fully covered with no gap between

The ruin of the fortress of Chalcis (Greek “Χαλκίδα”) is located on the Greek island of Euboea. In 1157 it was pillaged by Normans. Beginning in 1209 the fortress became a Venetian colony, renamed Negroponte, and was one of the easternmost military outposts of the Venetian Empire. In 1470, after a couple of years of hard

Beginning in approximately 1360 lentner armor (a type of armor constructed mainly with leather and a precursor to the brigandine) began to be reinforced by steel plates. This basic armor consisted of steel plates which were riveted or sewn to the base material. Over time, the plates that protect the chest and back became bigger.

The brigandine was naturally developed from early coats of plate, a reinforced surcoat from the XIII century. One of the rare examples of this early armor type can be seen on the statue of St. Maurice in Magdeburg Cathedral (1240). St. Maurice is depicted dressed in chainmail and a surcoat. There are two rows of 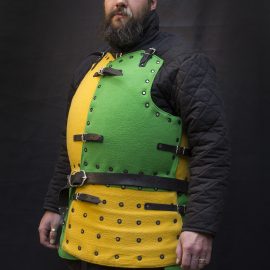 Brigandine cuisses additionally reinforced with steel plates. Articulated knees are joint with cuisses by rivets, it’s one piece – no holes, no leather laces. Brigandine cuissards have leather points on the top and are equipped with leather straps and steel buckles. Thigh is well protected from all sides. Brigandine armor is very adjustable because of